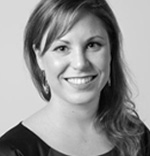 As a little girl, Caroline would sketch dresses and dream of becoming a fashion designer. It was a dream she never outgrew.

Caroline studied at The University of Illinois, earning her bachelor’s degree in Marketing of Textiles and Apparel. She later studied at The Fashion Institute of Design and Merchandising in Los Angeles. It was there that Caroline began her career as a stylist for film and television. It was also where her idea for a couture bridal line inspired by the classic elegance and timeless sophistication of the golden age of cinema was born.

Embracing the style and romance of old Hollywood, and her passion for costume design, Caroline returned home to Chicago in 2001 to start her own label. She debuted her first collection in New York in the fall of 2003, and three years later she opened her first retail space in Chicago’s Bucktown neighborhood.

Today, Caroline has two amazing little girls (and a wonderful little boy) of her own. She recently celebrated the grand opening of her new designer studio in her hometown of St. Charles.  She still sketches dresses.